Earlier this year Harry Portch was awarded “Thames Valley young entrepreneur of the year”. Following his awards success Harry spoke to SME Today about starting up his business and his future. 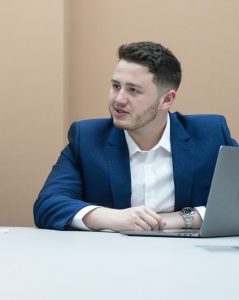 Harry is the founder of HM staffing, a recruitment agency aiming to offer a service to recruiters and candidates.  Harry established HM staffing around 3 years ago at 20 years old and became the UK’s youngest recruitment agency founder. The business grew quickly and from working at his kitchen table in the beginning he now owns two offices across the UK with a third in the works. He has also gone on to host a chart-topping podcast, The Spike, and works with some of the most popular companies in the UK. HM staffing cover recruitment in a variety of different areas including Finance, Marketing, HR and Retail.

Harry first entered the recruitment space with the help of one of his friends who was working at a recruitment agency. After gaining 18 months experience with the company it was time to move on, much to the disappointment of many of his clients who were keen to continue working with him. Sensing an opportunity Harry had two choices; he could join another agency and take these clients with him, or he could take a leap of faith and start his own agency at the tender age of 20.  With nothing to lose and everything to gain Harry opted for the latter and HM Staffing was born in December 2018.

In the first year HM Staffing generated a large volume of business and boasted some “FTSE 500” companies among their clients.  The Company grew at an exponential rate. They now recruit for corporations such as Build a bear, BT and “We buy any car”. Talking about his customers Harry told SME Today “My passion is getting to know individual clients and putting them into roles which are best suited for them.”

Outside of his day job Harry enjoys helping the community in any way he can through community projects. He has visited Uganda a handful of times to carry out employability and CV workshops for local people. Around 30 people attend each workshop, and everyone leaves with a CV which they can hand out in the local town boosting their employment chances.

At the start of 2020, just before the pandemic hit, HM Staffing decided to switch to video interviews which continued throughout lockdown due to social distancing restrictions. Every client was filmed speaking about their particular needs. 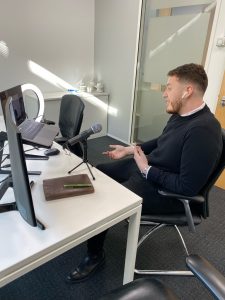 Very few other recruitment agencies used this method, enabling HM Staffing to attract bigger businesses and gain more exposure. Although lockdown did create opportunities in some areas, it also hindered in others. Of course, redundancies were rising, and fewer companies were looking to hire, but this gave Harry the time to get involved in other community-based projects such as offering free CV help to those who needed it via Zoom. He even did a session in Kenya, via Zoom, and gained positive feedback that he had helped people get jobs off the back of this.

All in all, lockdown was a busy time for Harry. He opened his second office in Manchester in November of 2020, and also started his own podcast “The Spike”, in which he interviews business owners and identifies their “unique selling point”, the thing that makes them stand out. He has interviewed Lewis Ellis, from series 15 of The Apprentice, and Henry Milroy, co-founder of Pan n-ice, amongst others. The Spike Podcast has featured on multiple Apple Charts including the Top 20 Entrepreneurship.

Harry firmly believes that the success of his business is down to having the right people around him. He hires at a junior level and trains employees up to senior level roles. The result is a team that is extremely close knit, everyone gets along, and they motivate one another, which is why he thinks the business has thrived. He shares his future aspirations with his staff and gives them a clear vision of how they will fit into this and how they can progress through the company.

The journey hasn’t always been easy, and Harry has faced issues with people discarding him and his company due to his young age. But he is determined to show that your age doesn’t determine how successful you can be.

When asking Harry about his plans for the future, he intends to grow his Manchester office for the next 2 years and then aims to open more offices. He hopes to open an office in Birmingham City Centre and then begin to expand over to Ireland and overseas in America. He is aiming for 5 offices globally, which from the growth of his business thus far, is looking highly achievable.

Interview and article by Lilly Daffon