Dame Irene Hays and her late husband John, who founded Hays Travel, were among the business leaders honoured at this year’s North East Entrepreneurial Awards.

They were acknowledged for their longstanding contribution to the region, particularly within Sunderland where the Hays Travel headquarters is based, and for saving thousands of jobs when they purchased the Thomas Cook retail operation. 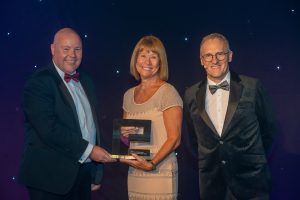 The company, launched in 1980 by John, is now the largest independently owned travel agent in the UK, with sales of over £1 billion per annum, 7,500 employees and 450 retail branches.

An avid supporter of entrepreneurship in the North East, John, who died suddenly last year at the age of 71, was also praised for his contribution to the Entrepreneurs’ Forum, having served on its founding board for five years. He also won its first ever Entrepreneur of the Year award in 2004.

Meanwhile, Dame Irene was commended for her work with the Hays Travel Foundation, its apprenticeship scheme and for her role in the Bath Travel and Thomas Cook acquisitions.

Accepting the award, Dame Irene said: “John was very proud to receive the Entrepreneur of the Year Award in 2004 and he would have been equally pleased to receive this Award too.

“It is a huge honour for me to share the Award and, as always, I pay tribute to the fantastic staff of Hays Travel who have helped us to achieve so much.”

Delivered in partnership with ION, the black-tie awards ceremony – attended by George Freeman, the Minister for Science, Research and Innovation – celebrated entrepreneurs who stood out from the crowd, leading dynamic, innovative businesses and making a genuine change to the North East. The evening was hosted by writer, comic, actor, and BBC Radio Newcastle presenter, Alfie Joey.

Lee Hutchinson of Double Eleven was named the 2021 Entrepreneur of the Year. Lee founded Middlesbrough-based Double Eleven in 2009 after a successful gaming career and has since grown it into a leading console porting and publishing agency working with the likes of Microsoft, Sony and Paradox Interactive. The company has achieved record levels of turnover and profit this year and has more ambitious projects in the pipeline.

The Emerging Talent Award was presented to Dan Parker of Aspect Facades, which is based at Shildon, County Durham. Having averaged year on year sales growth of 270% across the first four years of trading, Aspect Facades are now set for another bumper year of growth and are on track to achieve revenues of £8 million for 2021.

Steven Rawlingson, founder of global manpower specialist to the renewable and rail sectors, Samuel Knight International, was named Scale-up Entrepreneur. Steven set up US operations in 2019 and hasn’t looked back. Despite the challenges of the pandemic, the Newcastle-headquartered company has scaled exponentially and are now providing the manpower to build renewable energy production facilities across the USA, with plans to expand into Asia and beyond.

The Mentor of the Year award was presented to Bill Scott OBE who, after growing Wilton Group, based at Port Clarence, Teesside, into a successful engineering firm, is now giving back his expertise and knowledge to help other North East business owners prosper. He was praised by those he has worked with for the ‘passion and interest’ he shows, the ‘confidence and positivity’ he instils in those he works with and for being a ‘genuine inspiration’.

James Robson MBE, the Forum’s chairman, said: “Our North East Entrepreneurial Awards are always a fantastic celebration and acknowledge the dynamic and innovative businesses based in the North East, and this year was no exception.

“Our winners have navigated exceptional circumstances and led their businesses to strength, all while supporting one another and those they work with.

“Our Lifetime Achievement award recognises those who have shown huge commitment over a significant period to the region, making a major impact on our local economy. I can’t think of two people more deserving of the accolade.

“John and Dame Irene built Hays Travel into one of the region’s largest employers, while prioritising the development of their team, the experience of their customers and their contribution to the wider community through the Hays Travel Foundation.

“John was a fantastic entrepreneur and role model and together with Dame Irene, built an outstanding business.”

John and Dame Irene were propelled to national prominence in 2019 when they acquired the failing Thomas Cook retail operation, securing jobs for 2,300 individuals and hiring an additional 500. The deal tripled the size of Hays’ retail estate and doubled their workforce overnight.

John was inaugurated into the British Travel Industry Hall of Fame in 2010 and received the honour of the Freedom of the City of Sunderland in 2016 while Dame Irene was awarded a CBE in 2008 and made a Dame in the 2020 New Year’s honours for her services to education, skills, and young people.

The awards were held at Hilton Newcastle Gateshead and supported by ION, Ward Hadaway, the Malhotra Group, IA Growth, Qrious and Agilico.