On 28 December 2020, George from Cotswold Wildlife Park completed a marathon around the Park in aid of Save the Rhino. 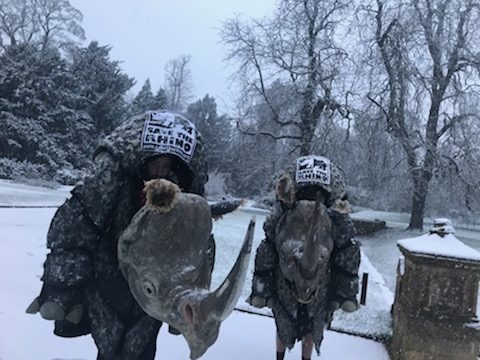 When he originally planned it, George didn’t think it would involve running in the snow on a freezing winters day! He ran 52 laps of the half mile circuit around Cotswold Wildlife Park inside a cumbersome Rhino costume, cheered on by our six White Rhinos, Henry and Molly (Head Keeper’s children) and the rest of the keepers.
After seven hours of running in very challenging conditions, the marathon was finally completed. Congratulations to George and Eden for their incredible achievement and thanks to everyone who sponsored him and posted lovely comments on our social media. George said: “When we initially planned it, it was a bit of a joke but then before we knew it, we were dressed in the Rhino suits running through a blizzard! It took longer than expected due to overindulgence at Christmas but the amazing support kept us going which we are so grateful for”.

So far, they have raised £8,686 for Save the Rhino. If you would like to sponsor George, here’s the link: https://www.justgiving.com/fundraising/run-4-rhinos. Thank you so much for your support.

*Please note: Cotswold Wildlife Park is currently closed to visitors. Any updates will be posted on the Park’s official website (https://www.cotswoldwildlifepark.co.uk) and social media pages*