In many ways, life has never been better. We live about 10 years longer than just 50 years ago, we have all sorts of goods and services that not long ago even a billionaire could not have – high-speed internet allowing unbelievable access to information, almost infinite streaming movies, songs, TV and hundreds of medicines. Yet for all this improvement there is a feeling that we are all a bit stressed and gloomy. There is some new evidence that what is making us feel bad is not necessarily the state of the world, but how we are getting our information.

Media – we have evolved to seek bad news

Media preference for bad news is a well-documented bias that has a logical evolutionary explanation. As we evolved, there was a natural tendency to pay more attention to negative information. Data that indicates you are about to be eaten or attacked is naturally more significant than everything else. This core evolutionary preference is part of the reason that we are drawn to read bad news. There is evidence that parts of our brain are more alert for negative information, our amygdala is hijacked. The media know that bad news sells and that is why they deliver it to us. The reason for lots of bad news is not necessarily that the world is bad, but that we are told about the negative stuff more often. Gradual improvement is, by definition, not news. You will never see the headline “Another 13,000 people escape extreme poverty today”. This has happened every day on average for 20 years and is great news but not newsworthy.

The news is inherently biased towards violent events because of the simple fact that they are events. Max Roser, an economist at Oxford University who collects data on the world’s development, puts it this way: Things that happen in an instant are mostly bad. It’s this earthquake or that horrible murder. You’re never going to have an article on the BBC or CNN that begins by saying: “There’s no famine in south London today or child mortality again decreased by 0.005% in Botswana. The American public radio journalist Eric Weiner says, “the truth is that unhappy people, living in profoundly unhappy places, make for good stories.”

Just because there is a lot of bad news, it doesn’t mean the world is bad.

There are plenty of good things about social media but there is also growing evidence that in many cases it makes us feel worse. Our tendency to feel worse was summed up nicely by Theodore Roosevelt: “Comparison is the thief of joy.” You are pottering along nicely; then you see what someone else has and naturally want that too. Social media has two main ways it amplifies this problem. First, it is possible to compare yourself to a lot more people. Probably even worse is that people publish polished versions of their lives. There are photos of exotic holidays, great parties and their success at everything. You can’t help but make the comparison and feel a little inadequate. Gore Vidal put it nicely: “Whenever a friend succeeds, a little something in me dies.” We can now see a constant flow of mini successes by those close to us that could well add to making us feel bad.

There is growing evidence of the harmful mental impact of social media. Researchers in Denmark split 1095 daily Facebook users into two groups, half given access to the site as usual, and the remainder forced to quit cold turkey. They found that after a week, those on a break from the social network felt 55% less stressed. A Harvard Business Review article concludes the more you use Facebook, the worse you feel. It would not surprise me if we look back at unregulated social media as the equivalent of information crack cocaine. To be balanced there is also evidence that social media can be useful for you too. The fact that we spend so much time on it shows that we value the ability to interact with a wide range of people in ways that we never previously could.

Data suggest the average person spends about 1300 hours on social media per year. Most of that is on Meta (Facebook Instagram etc). Meta makes about $50 per person per year so another way you can think about the time you spend on social media is working for Mark Zuckenberg for about 2 cents per hour!

Just because we feel bad after spending time on social media, it doesn’t mean life is bad.

The goal of advertising is to make you want something you don’t currently have, so you buy the product or service they are pushing. J. Walker Smith, of Yankelovich Partners, in 2004, released his company findings that the average person saw 500 ads per day in the 1960s and 1970s and as of 2004 the average person sees over 5000. The good news here is that some new services like TV on demand and podcasts can dramatically reduce exposure to advertising compared to live TV and radio. It is hard not to feel a pang of desire on a stormy day when your local travel agent flashes idyllic, sun-drenched images on special just for today. The crispness and size of that screen in the window makes my puny TV seem more inadequate each day.

Just because we have a nagging want for more things, it doesn’t mean we are hard done by – it is an inevitable consequence of being surrounded by messages telling us to want more things.

Negative information bias is different from bad news bias, as it is about the way we are more likely to take in any bad news we get from other sources beyond media. There is strong evidence that bad is stronger than good when it comes to information. We have a negativity bias, which is the tendency to give far more attention to negative details than positive ones. Steven Pinker summarised it nicely: “we are more likely to remember losing money, being abandoned by friends, or receiving criticism than we are to remember winning money, gaining friends, or receiving praise. The authors of a related study point out that negative information receives more processing and contributes more strongly to the final impression than does positive information.”

The psychologist Roy Baumeister reviewed a wide variety of evidence that people are more sensitive to bad things than to good things. If you lose $10, that makes you feel a lot worse than the amount by which you feel better if you gain $10. That is, losses are felt more keenly than gains as Jimmy Connors once put it, “I hate to lose more than I like to win.” My favourite way of describing this bias is by the folk at FutureCrunch, who said negative news is like Velcro on our brains while positive news is like Teflon. It is typical to remember the bad news, but this does not mean that the world is actually bad. It’s just the information that sticks most in our minds.

Just because we can recall lots of negative things, it doesn’t mean the world is negative.

Digital screen addiction is possibly a bit of a stretch as to why we don’t feel good about things but there is some evidence that getting information from a digital screen irrespective of what the information is, negatively impacts our mood. There is an excellent summary of research showing the more time teens spend looking at screens, the more likely they are to report symptoms of depression. After frequent use of a smartphone, more people feel lonely. It could well be that it is because of bad news or social media but it could be related to the constant flow of 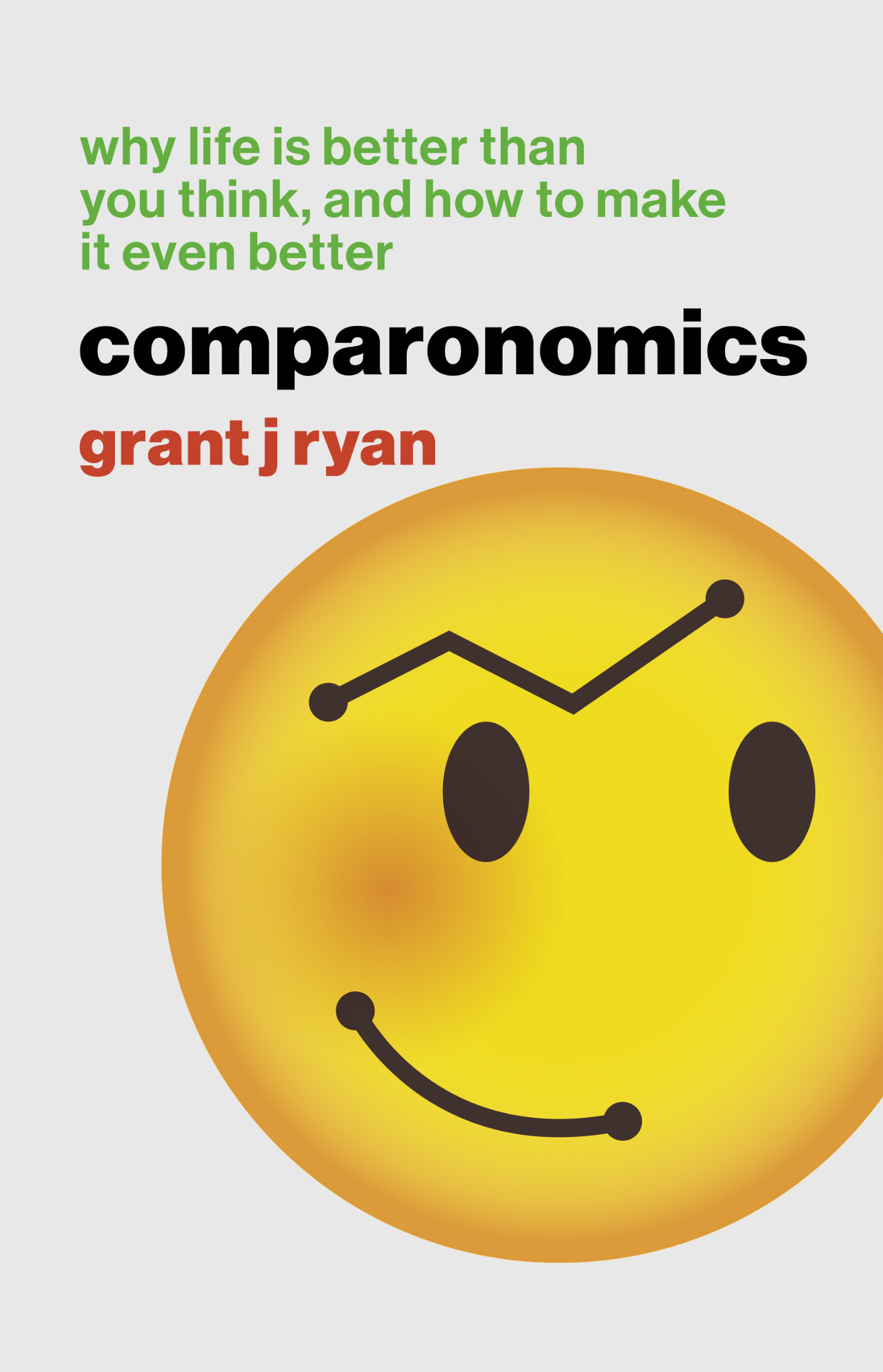 information that we never used to have. It could be related to the constant interruptions in whatever else we are doing rather than the screen itself. Sometimes a picture is worth a thousand words and this Banksy image (below) nicely captures this new potential feel-bad factor. It doesn’t matter what type of information the couple is looking at, it seems unlikely to make them happy.

A Banksy artwork, named Mobile Lovers, featuring a man and a woman embraced and looking at their mobile phones shows an example of “suboptimal” use of screens.

Just because we feel a constant pull of screens and dissatisfaction from these interactions doesn’t necessarily mean the world is a bad place.

Understanding how you get your information and the well-researched psychology behind it can go a long way to making you less gloomy about the state of the world.

Comparonomics: Why life is better than you think, and how to make it even better by Grant J Ryan is out now, published by Big Idea Publishing. For more information go to www.comparonomics.com

The correlation between gut health and employee mental wellbeing